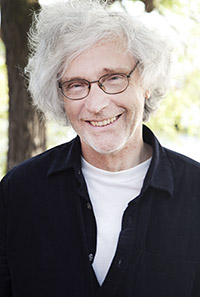 PETER LYNE ( b. 21st July 1946 in Northampton, England) started playing the piano at the age of 7. He soon became interested in writing music, and composed his first orchestral work at the age of 14. Although he did not receive any regular tuition, he was encouraged to continue composing by Benjamin Britten among others. He was school organist and had a growing interest in the works of contemporary composers such as Messiaen. In 1965 he was offered an organ scholarship, but decided instead to accept the Hadow Music Scholarship for composition at Worcester College, Oxford, where he received his first tuition in composition from Edmund Rubbra. After completing his BA in 1968, he continued his studies in Oxford taking the one-year postgraduate course in composition (B Mus) under the guidance of Kenneth Leighton.

In 1969 he came to Stockholm as a British Council exchange scholar to attend Ingvar Lidholm´s composition class. He continued his studies there until 1974. Since then he has worked in adult education, both as a teacher and an adminstrator. In 1983 he was appointed Head of Music at Kapellsbergs Musikskola, the music department of Härnösands Folk High School, where he still teaches composition, having retired from the administration in October 2011.

During this time he has continued to work as a composer being particularly influenced by his contact with Witold Lutoslawski and George Crumb. He became a member of the Swedish Society of Composers (FST) in 1975. Since 2005 he has been chairman of the National Society for the Promotion of New Music in Sweden (RANK). In 2007 he was awarded an honorary fellowship by Birmingham Conservatoire, England. Many of his works have received radio broadcasts including his Symphony no 1 ( completed in 1988) in a recording made in 1992 by the Stockholm Philharmonic Orchestra under Ansgar Krook. His Concerto for Recorder and String Orchestra (1991) was first performed by Dan Laurin and the Nordic Chamber orchestra. He has received commissions from the same orchestra, the Clarinet Concerto (2000), written for Martin Fröst, and the song cycle The Swallows in the Cathedral (Svalorna i katedralen) (2006) with texts by the Swedish poet Jan Wolf-Watz, first performed by the opera singer Jesper Taube. In 2008 he wrote the music for the Norrdans/Musik i Västernorrland production of Blow the Bubble (four dancers, eight musicians and a singer) with choreography of Danielle Dietz.

Among later works are Symphony No 2 (2012), the cantata Oh Galuppi!,  för counter-tenor, blockflöjt, barockviolin, gamba och teorb (2014) (text, Robert Browning), In a Dark Time (2015), cantata for mixed choir and orchestra,       The Seasons ( 2016), cantata for mixed choir and orchestra in four movements to texts of John Clare, and Preludium and Fugue for chamber ensemble (2018).

He has also written a large number of chamber and choral works, see list of works.